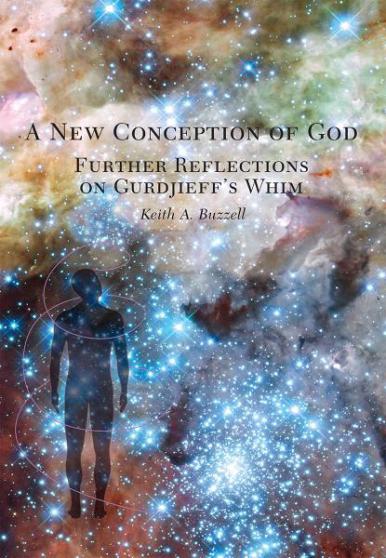 "A New Conception of God: Further Reflections on Gurdjieff's Whim by Keith A. Buzzell continues the thread that was introduced in the first volume, Reflections on Gurdjieff's Whim. In this 314 page volume, bountiful with full color, exquisite illustrations, Buzzell shares his unending pursuit of "fathoming the gist" of G.I. Gurdjieff's three series of writings under the title of All and Everything, with an emphasis on the first series, Beelzebub's Tales to His Grandson. Included with the book is an eight page fold-out of key illustrations which can be a substantial aide for the reader to navigate through the complex concepts. In every long thought, Buzzell pursues the implications of current scientific discoveries in the fields of physics, chemistry, biology, evolutional biology and cosmology, revealing the vastness of Gurdjieff's vision of the potential evolution of three-brained beings: us humans on the planet Earth. Buzzell examines Gurdjieff's concept of Conscience, exploring the implications of its involvement in all parts of one's being, with emphasis on the relationship of Conscience with Reason. He takes up the perennial question of war, focusing on its origins within the subconscious. He goes deep into the interstices of the power of the survival impulse in all our three 'brains' or centers: body, feeling, thinking and identifies their essential qualities which throw light on the mechanics of egoism. Buzzell responds to Gurdjieff's injunction to comprehend the essential difference between sensing and feeling, giving a convincing and clarifying account of the biology of these two distinct experiences, as well as their ancient sources. Throughout, a symbol is employed, called A Symbol of the Cosmos and its Laws, which visually organizes the complex notions of levels in Gurdjieff's concept, the "Ray of Creation" as well as many other concepts such as the significance of the digestion of food, air and impressions. With this symbol, Buzzell helps us to see the intrinsic lawfulness of all event and process. The book culminates with a chapter, the title of which gives a taste of its magnitude: "Attention (H12), the Greatest Gift to Life; The Power to Pursue Meaning and Purpose.""